... and a Kitchen Makeover 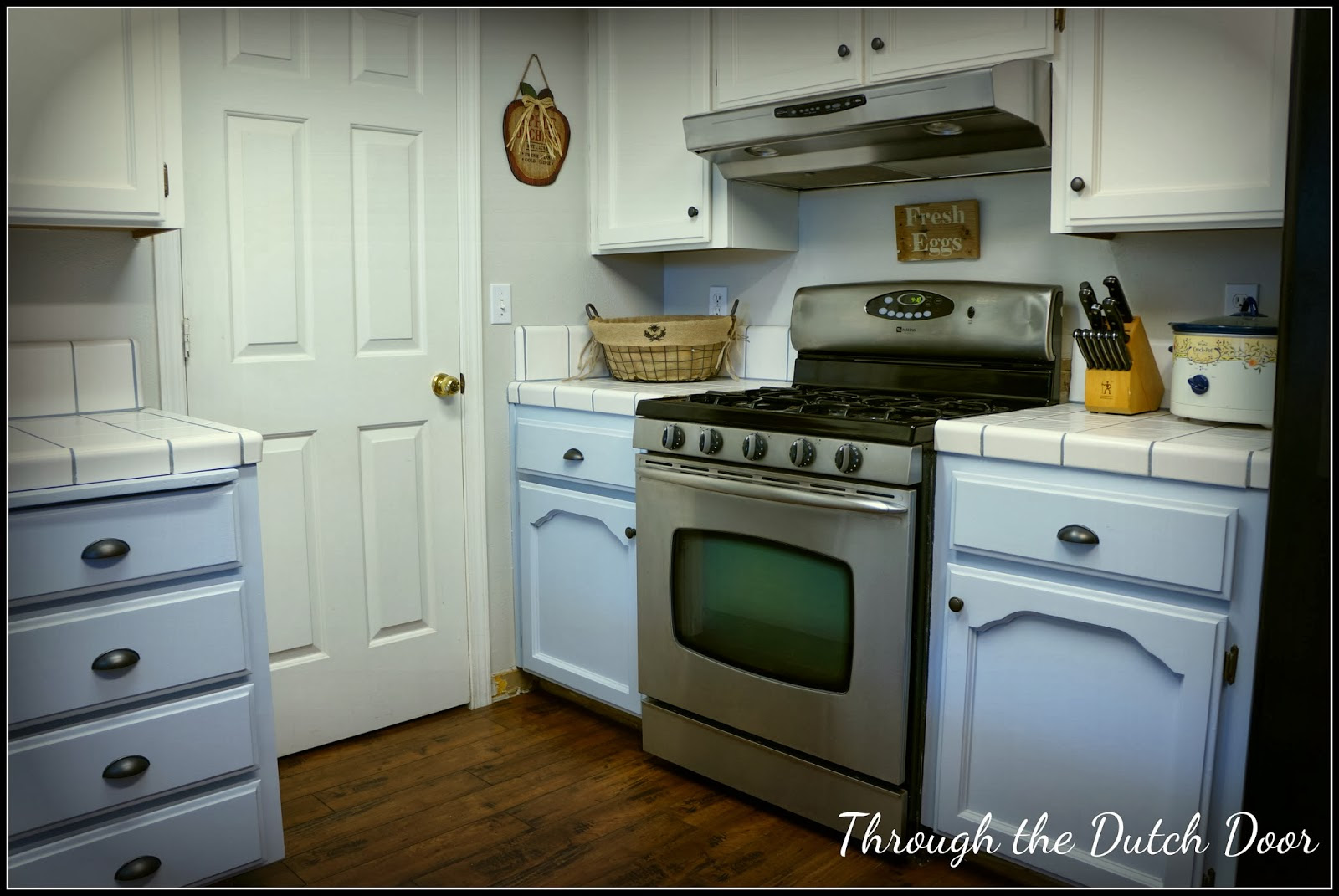 My name is Misty and I live in Central California.  My family and I bought our dream home almost a year ago, a fixer that we've been working hard on to make our own.  My job that pays the bills right now is Massage Therapist, but I also write, do photography, arts and crafts, and anything else that sounds fun.  I am an avid runner and have run several half marathons and am currently in pre-training for my first full marathon this November.  I started Through the Dutch Door to document our journey from house to home.


This kitchen has been a trial and error from the beginning.  I was afraid to start any projects on the kitchen because I knew it would be a big deal.  I just had no idea how big it would be. I started off wanting to do a blue kitchen.  I had come across this gorgeous blue cottage kitchen from Cottage4C and I knew I had to have it. 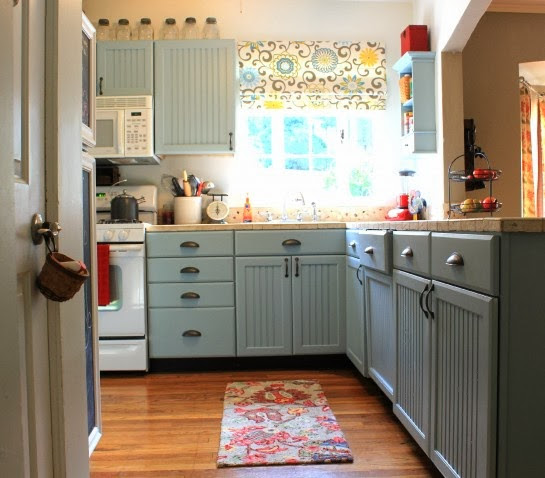 Here is what our kitchen looked like when we moved in. 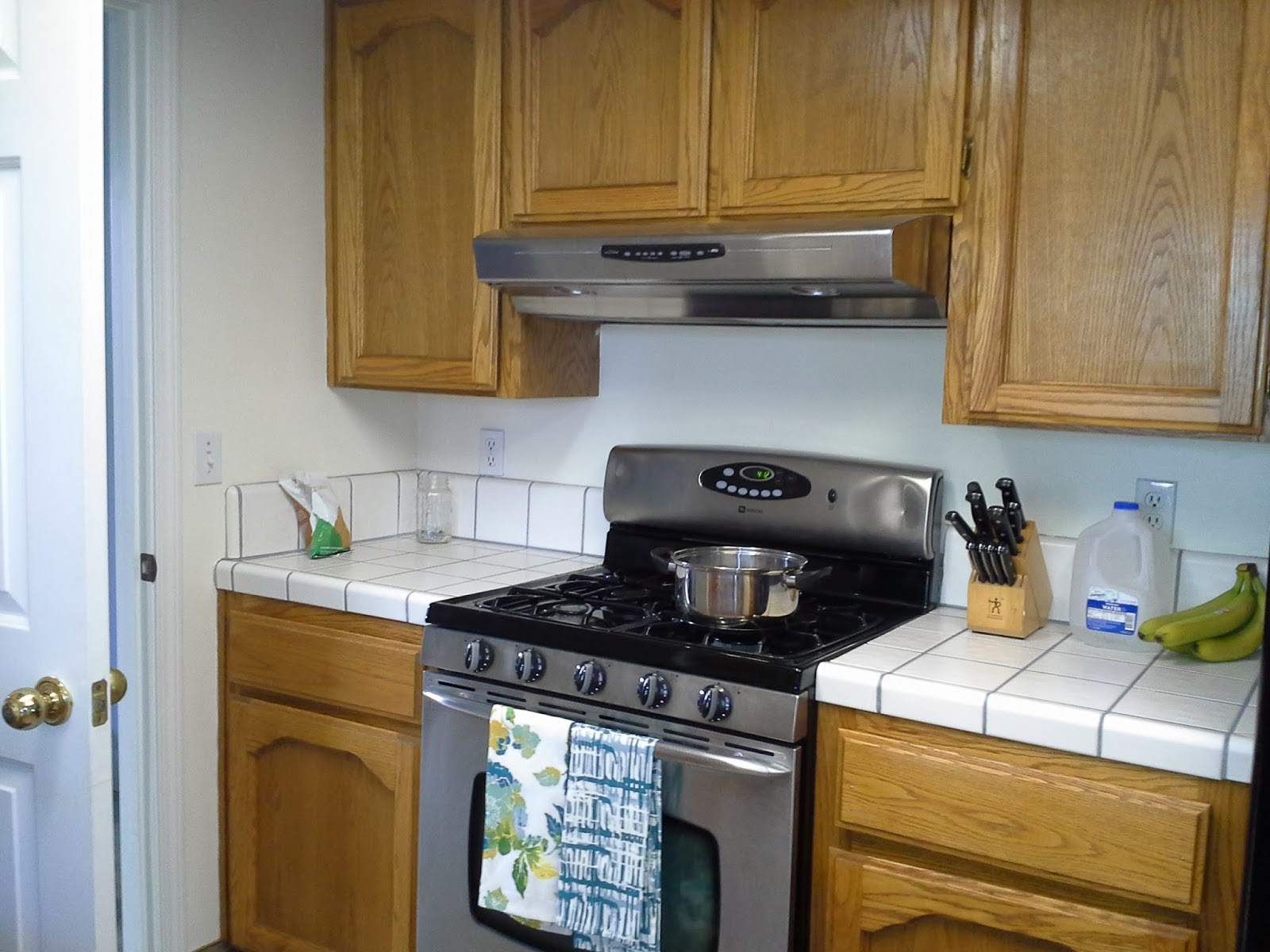 I also figured that the only way to achieve this look was from chalk paint. Let's forget this happened shall we?
After getting about 85% done with chalk paint, I realized I hated everything about it.  I hated the color, which was Paris Grey, not this beautiful robin's egg blue that was in the kitchen picture.  I hated the feel and look of the chalk paint which came out thick and streaky.  I hated that it took me twice the amount of paint that the Annie Sloan stockist told me it would, and I still needed more paint.  I hated that it took me a whole day to wax the darn thing and when I tried to antique it with the dark wax, it just came out looking like somebody smeared poo all over the walls (sorry, bad visual). Not a good look for a kitchen.  Oh, and when I took a rag to it, it immediately would rub off.
So I had it in my mind that I would have to strip the entire kitchen and start fresh.  After awhile, I decided I would just clean the wax off of them, and paint over the chalk paint.  I had decided on doing a two tone, light on top, blue on the bottom.  I just could not commit to an entire kitchen of blue and after the mishap with the chalk paint, I was scared to do anything at this point.  I chose a Martha Stewart color called Glass of Milk for the top.  Fancy way of saying creamy white. 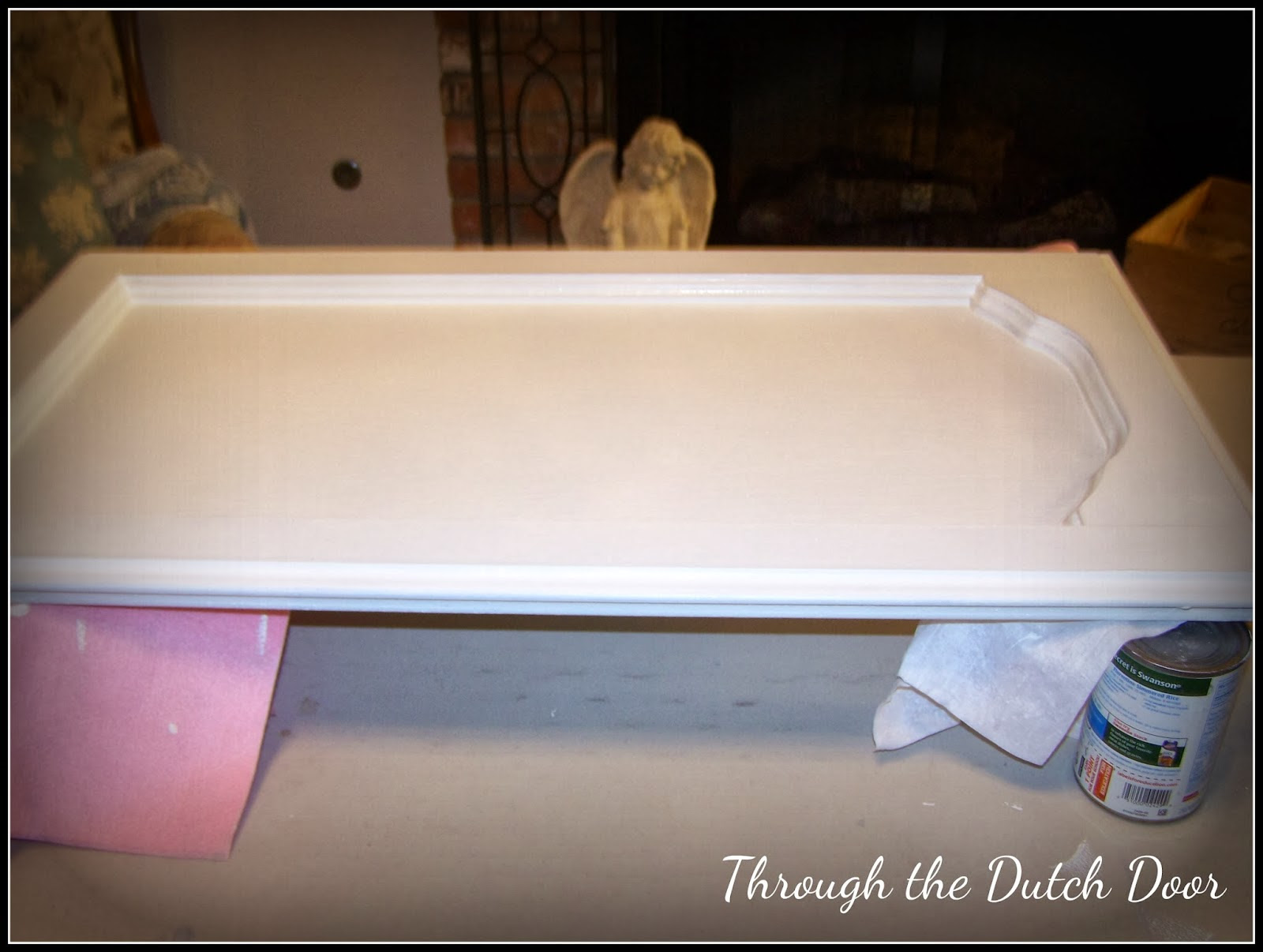 I took down two doors and started with that.  I was determined to take my time and not rush it.  I used Gold Canyon Candle wax remover and it slipped that wax right off.  Then I used some Awesome spray, available at the Dollar Tree, to clean any grease or grime.  And what to my surprise?  The chalk paint just came right off.  I did try to sand it for awhile but found that wiping it off with Awesome spray would take it right off.  I did this until the cabinets were back to where we started, light oak. 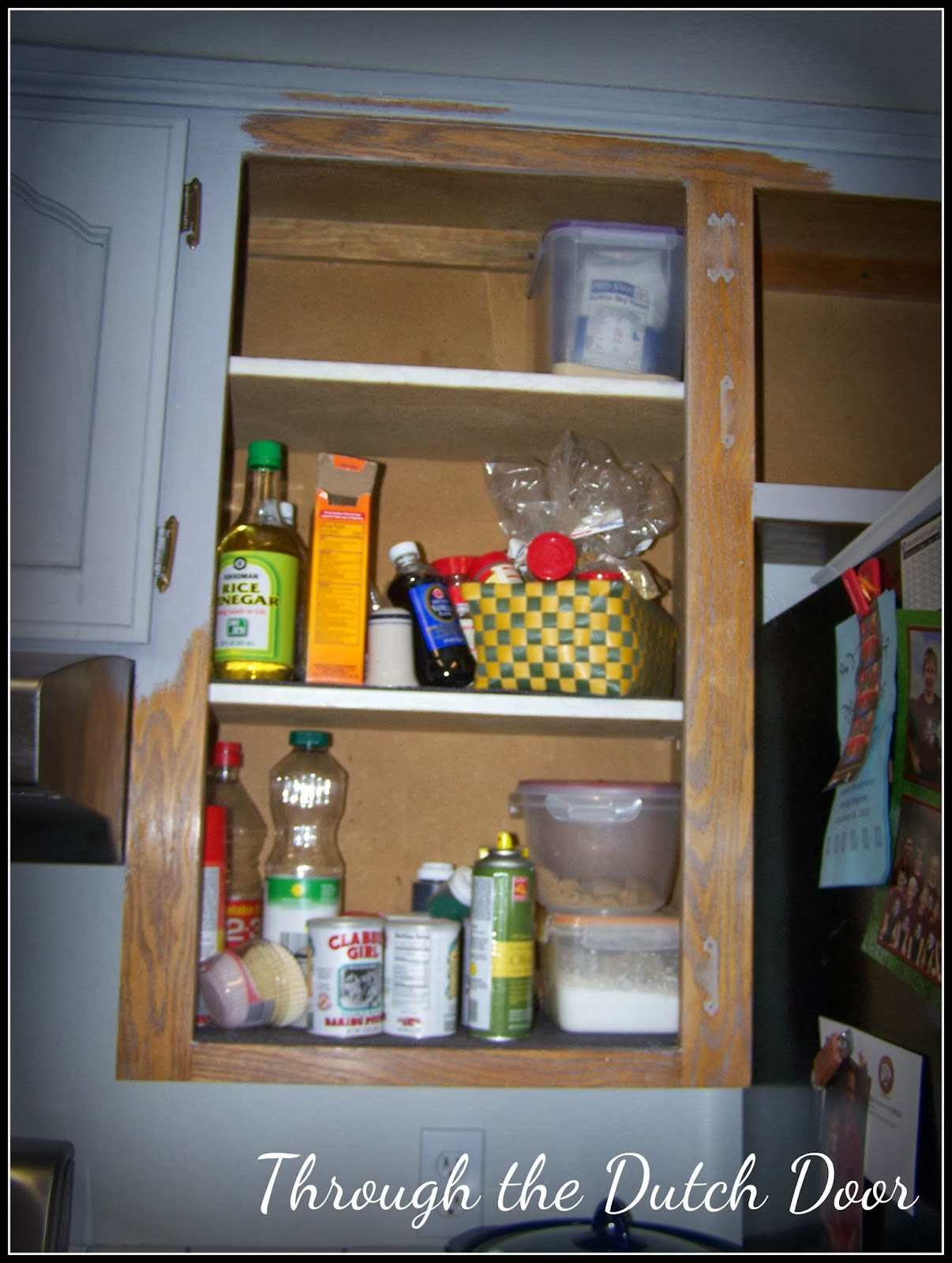 Next I used a sponge roller and a sponge wedge brush.  I did the backs first, then flipped over and did the fronts, starting with the recessed areas.  The paint turned out so creamy and smooth.  I love it! After about a week and a half, I was sick of wiping off chalk paint.  My hands were dry and cracking from the chemicals, everything was a mess.  When you wipe off the chalk paint with Awesome, it makes the paint back to its original liquid state, so then I had to clean that off, of everything!  So I tried on one door and discovered that I could paint directly over the chalk paint, minus the was, and still come out with an ultra smooth finish.  And because the chalk paint worked as a primer, I didn't use as much of the Glass of Milk that I had before.
Once the top cabinets were done, I started on the bottom.  For the bottom cabinets, I used Behr Misty Surf.  I bought the primer/paint in one.  Overall, I like Behr much better and it went on so much thicker, so it took only 2.5 coats.  I used an entire gallon of the Glass of Milk for the top and only about 1/3 of the Misty Surf.
Overall, this project took me about three weeks, as I wanted it to be done right.  I added some hardware, a little towel hook, a new paper towel holder, a couple of details and we're stamping Done on this project!
Here is our finished kitchen!  I love it! 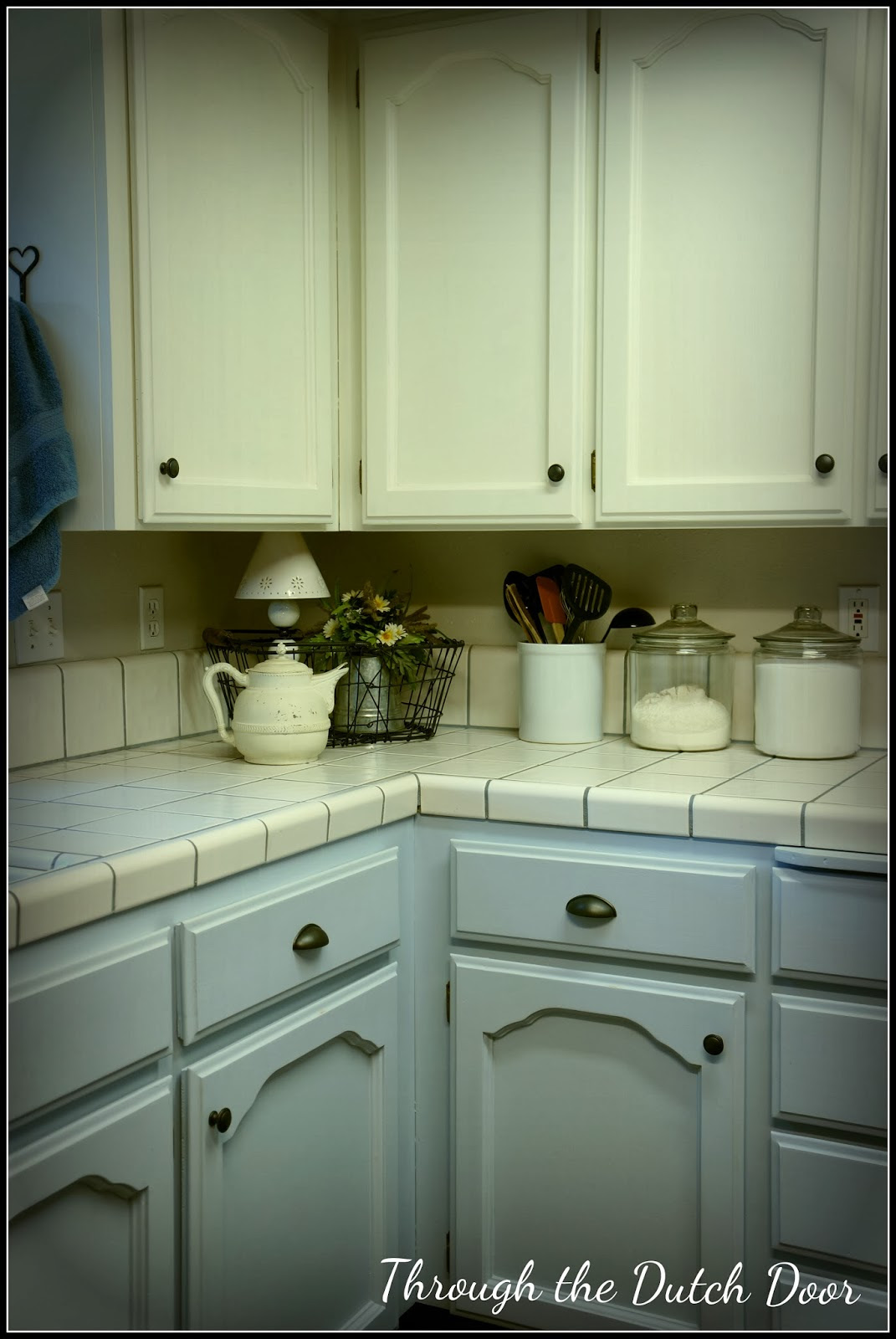 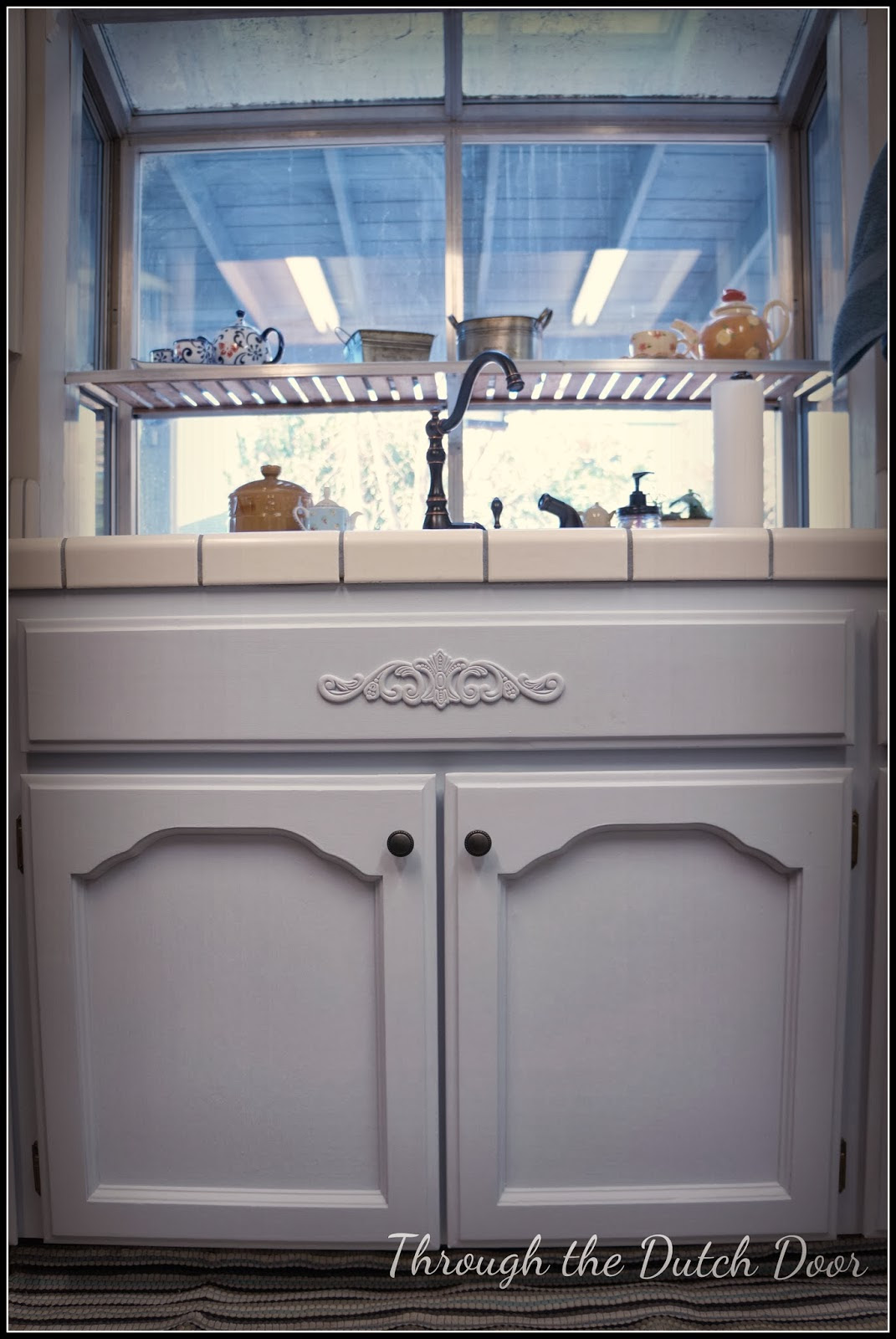 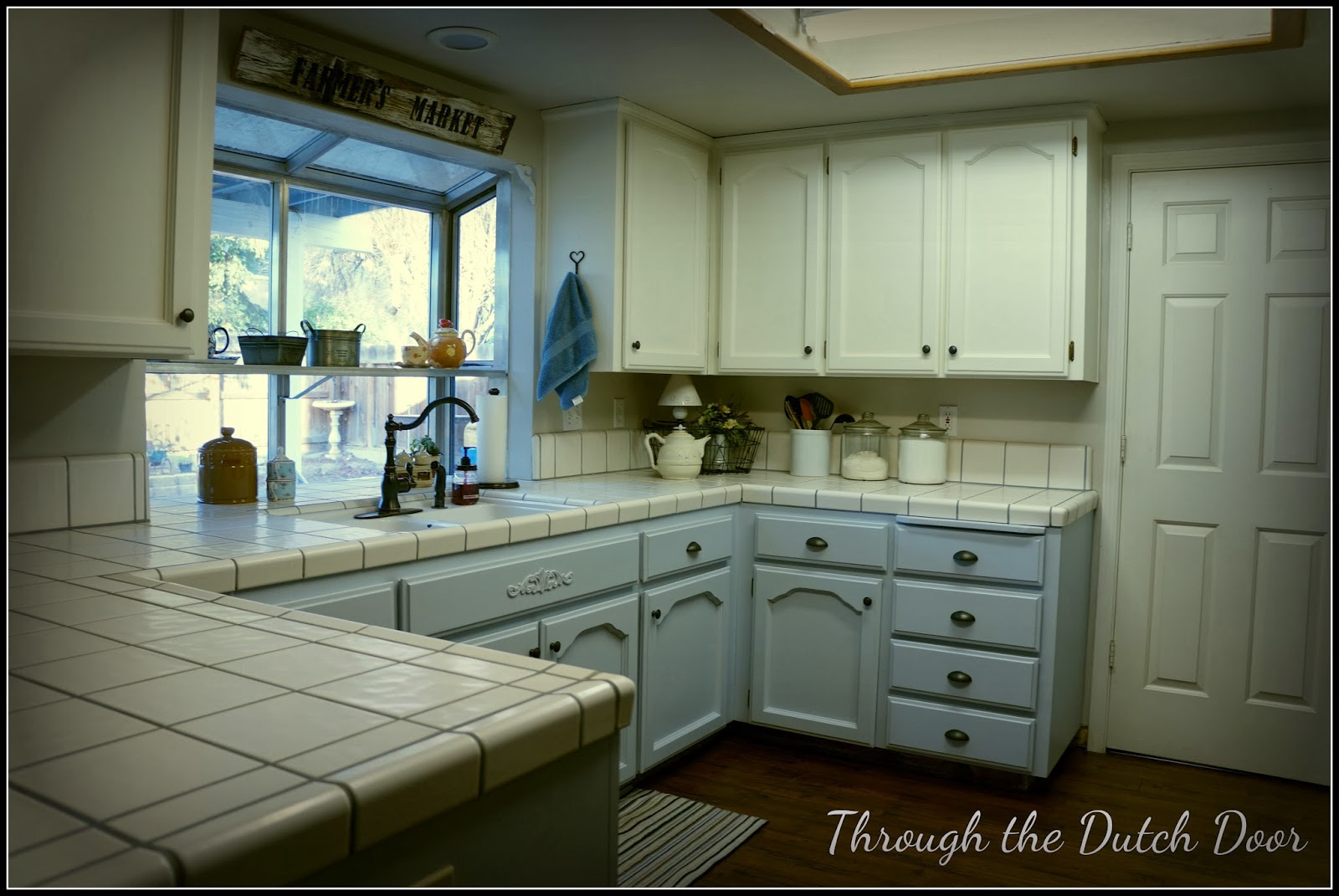 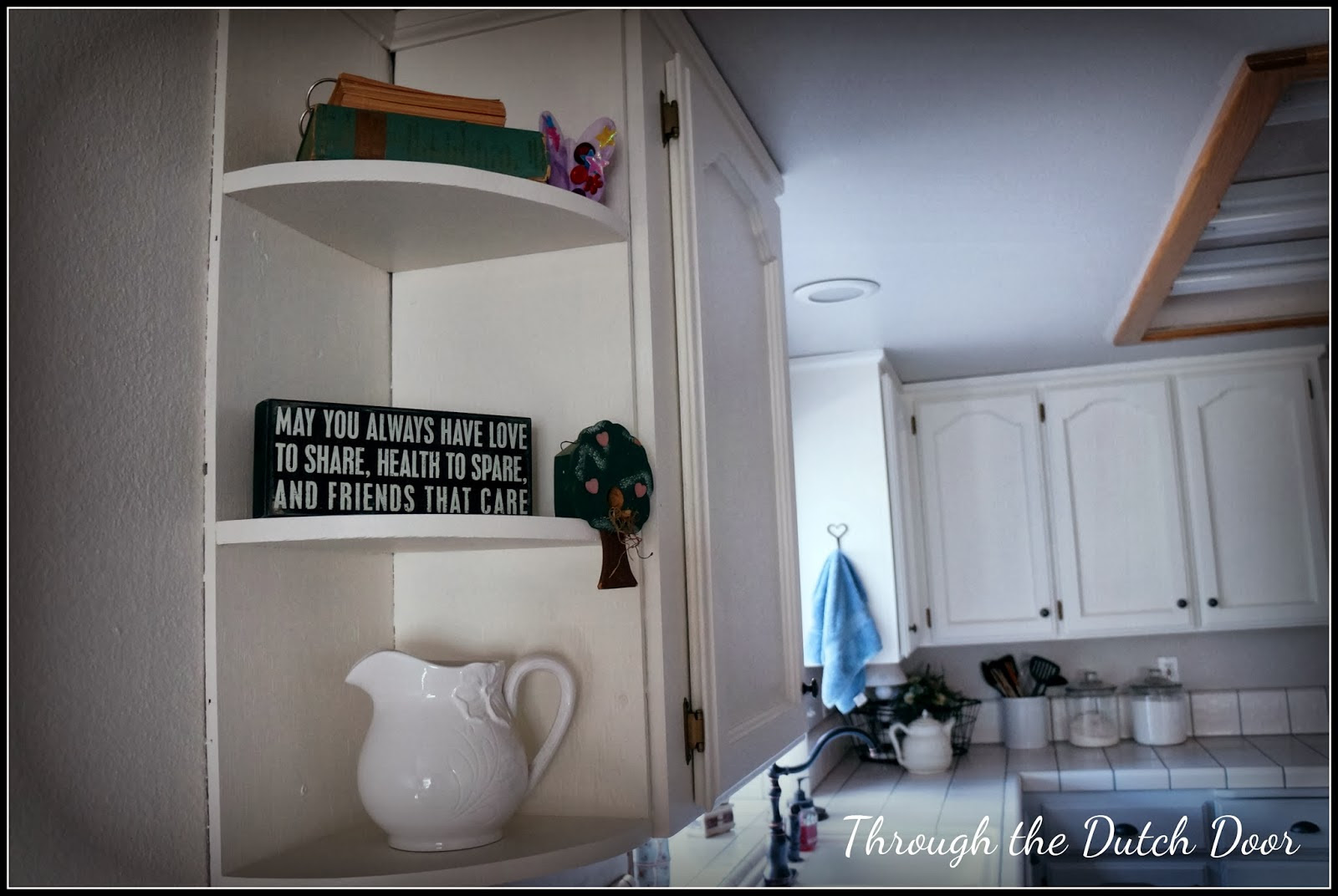 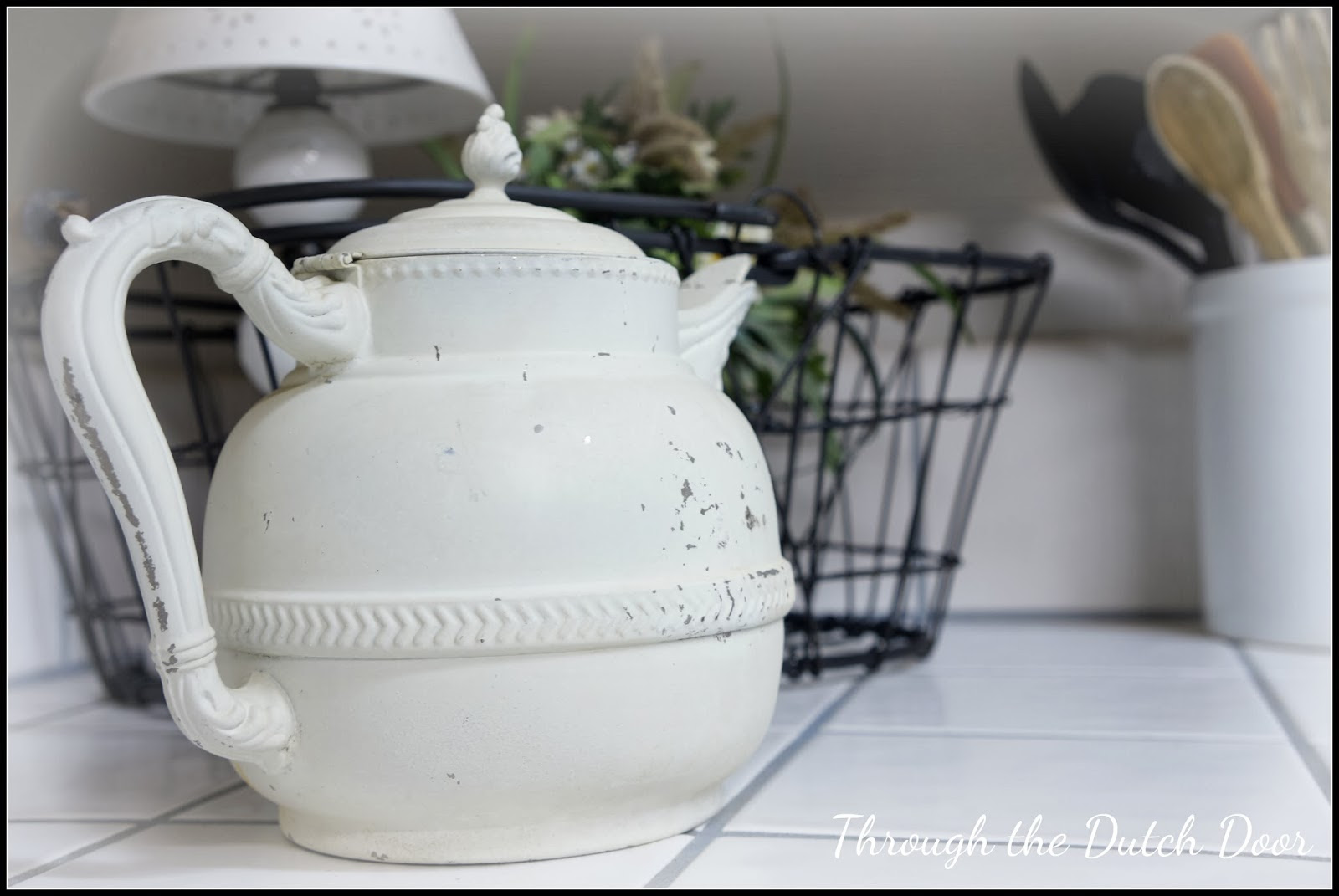