... and a Brief History of Stripes!

Today we have the pleasure of introducing Sarah Cross who is talented weaver, based in North Devon who has written a great guest post for us about the history of stripes in cloth making.

"I had wanted to weave for years, and since I got my hands on a loom, I haven't been able to stop! I am an now an (almost) full time weaver and I enjoy creating unique scarves as it allows me to indulge my love of colour and texture. I like to use a wide range of yarns in each scarf, as I think it allows each scarf to have its own personality.
Each scarf takes roughly 10 hours to make from start to finish, and they are made in a small room in my cottage in rural North Devon...."

A Brief History of Stripes.... 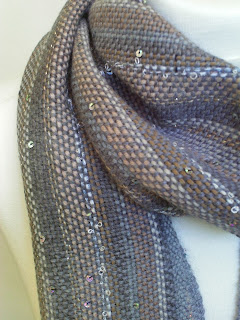 Did you know that in Europe, during the medieval period, people thought that striped creatures, such as zebra's and colourfully striped fish, were created by the devil, and, that to see one in the flesh would ensure you ended up in the wrong place when you died? It was genuinely believed that anything so 'unkempt' in its appearance was not pure in its creation!

That's not all....in 1300's France, you could be arrested if you had stripes of any kind on your textiles, especially if they were in your clothing. This was a bit of a shame for the Carmelite order of monks - when they visited France from their native Palestine, wearing horizontal stripes on their handwoven monks' habits....they were condemned for it by Pope Alexander IV and asked to go back to where they had come from.

Slowly, the attitude towards stripes changed, but they were still predominantly worn by people of low class. In fact, when you think about it, stripes have long been used to show a low social status - just think of prisoners clothing or the clothing worn by people in workhouses...even in cowboy films, the 'ladies' in the saloons quite often wear striped dresses. 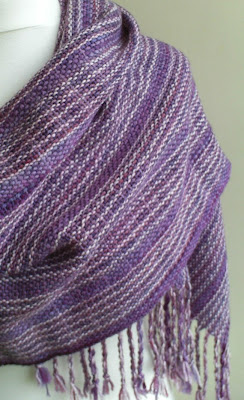 Thankfully, these days we are a bit more open minded about such things. Stripes have become a byword for most modern design, think about mattress ticking, pinstriped suits, the American flag and the iconic French Breton top.

As a weaver, most of what I make involves stripes. I have to think in a linear way when I prepare my warp (the vertical part of the weave), and also when I weave the weft (the horizontal pattern). Do I want to have wide stripes, narrow stripes...should they only be in one part of the fabric or all over it, should they be the same width or should I mix it up a bit? Decisions, decisions...and then I have to think about the colours I am using and how they all act when they are put together.

Crikey, it's enough to drive you insane...and you know what the 'mentally incapacitated' used to wear in bygone days don't you? I'll give you one guess!


Thanks to Sarah for such an interesting guest post, we're glad you can't get arrested for wearing stripy clothes these days!! Please feel free to check out Sarah's Etsy shop here and take a look at all her beautiful hand woven, dyed and knitted textiles. Would you like to do a post for us yourself? Please contact us and we will make it happen!!