I've always liked the idea of making a candle in a teacup, so when trying to decide what to make my Mum for Mother's Day I thought I'd give this a go with a  lovely vintage style teacup and saucer that caught my eye at a charity shop a few months ago. 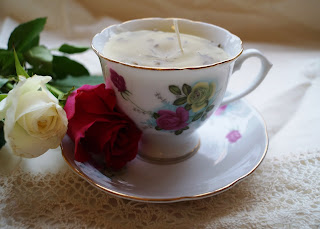 I'm sure there's a 'proper' way to do this but I thought I'd try for myself - I didn't follow any specific instructions and really just made it up as I went along (!) but here's what I did:

First, I dug out the cup and saucer from my 'this might come in handy one day' pile and gave it a good wash.

In my stash, I also found two long beeswax candles, which I seem to remember buying from a car boot sale for about 10p (again "just in case!")  It also solved the problem of where to find a separate wick as I just reused the one in the candle. You could just as easily use old candle scraps and buy a length of ready to use wick.

I cut the candle into small pieces - remembering just in time that I was keeping the wick, so shouldn't cut through that as well!

I then melted the wax using an old glass dish over a pan of water. I used both candles, which was enough to fill the teacup. If you're half as messy as me, I'd suggest using old utensils for this and not your favourite pots and pans!

Deciding that it looked a bit plain, I went a bit maverick and added some dried lavender along with a few drops of lavender essential oil to add a nice scent.

I found it a bit tricky to try and keep the wick standing up straight in the teacup... after several attempts it sort of worked by tying the wick to a wooden spoon and balancing it on two mugs while securing the bottom of the wick with a blob of wax. However, this may have been unnecessarily elaborate - maybe there's a simpler way of doing it?!

Pour the wax in carefully, leave to dry until the wax is solid and then snip off the excess wick.  I had a little bit of wax left over so made a miniature version in a seashell.

The top of the candle isn't as smooth as I had hoped, but it was my own fault as I became a little obsessive about getting it even and poked around too much! Next time I shall try to be patient and just to leave it to dry!! 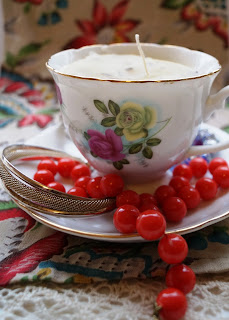 I'll be giving this to my Mum on Sunday for Mother's Day and think it will look pretty on her dressing table. I think the saucer could even double up as somewhere to store little pieces of jewellery - what do you think?
Posted by Craftysiany at 18:06