... and an Easter Felt Chick & Basket

Happy (nearly) Easter!! I don't usually make decorations for Easter festivities... but when I saw these cute felt chicks in a post by Myrtle & Eunice, I couldn't resist giving it a go myself! 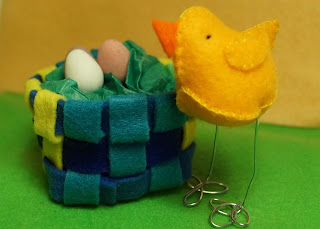 The instructions and photos on Myrtle & Eunice's blog are really clear and the step by step photos made it simple to follow. However, no amount of instruction could help with my slightly dodgy stitching on my first attempt... the legs ended up a little 'wobbly' as well!!!

Not wanting to be deterred, I decided to call this my 'prototype' and attempt another!! So here is what I did for the 'new and improved version'... Materials I used were:
Using the template, I cut out the felt pieces, sewed together using embroidery thread and a blanket stitch - by starting just underneath the beak and working up and around, until just underneath the tail.

Then I positioned the 'gusset' piece from the tail to the beak and continued stitching.  I left a small gap to fill with the stuffing (using a chopstick!) and then sewed closed. I then sewed wings in place (leaving the ends open so they can 'flap!) and added some eyes - I did this using a couples of overlapping stitches, through the head.

Legs were added by pushing a long piece of wire through the seams and then bending at the bottom to make feet.

And here is chick version two!! Still not quite perfect, but he's a bit more stable than the first! 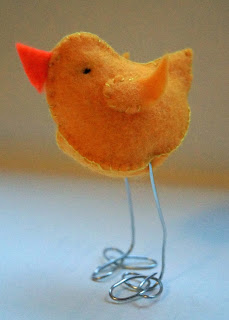 Having made my little chicks, they looked like they needed a nest of some sort... so when I saw this post from Pippa Quilts, I thought a woven felt basket would make a perfect accompaniment! There's also a great version by Nap-time Creations which is a similar basket with a handle added that can be used for Easter Egg hunts.

Again, the instructions on Pippa's post were really clear and simple to follow.  All you need for this is:
Start by creating your base, using 6 of the strips and weaving together. I slightly improvised, as the felt pieces I had were only 9" long, so I cut 9 strips each 1/2" wide.

Then make three of the strips into rings by cutting 1" off each and gluing together. (Note - my measurements are slightly different from the original post as I was using smaller strips!).

Repeat the process with your other two rings, making sure that you keep the weave tight. To finish off, fold each strip over the top (alternating between inside and outside), glue, trim the excess and tuck under each piece to make a neat edge. 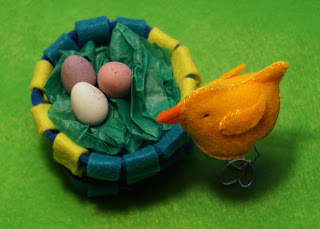 With his slightly 'wonky' friend...! 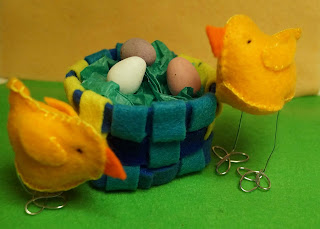 Once I'd got the hang of the techniques, both the chicks and felt basket were great fun to make. I think next I'll try a larger version of the basket for storing some crafty bits and bobs!
Posted by Craftysiany at 14:03